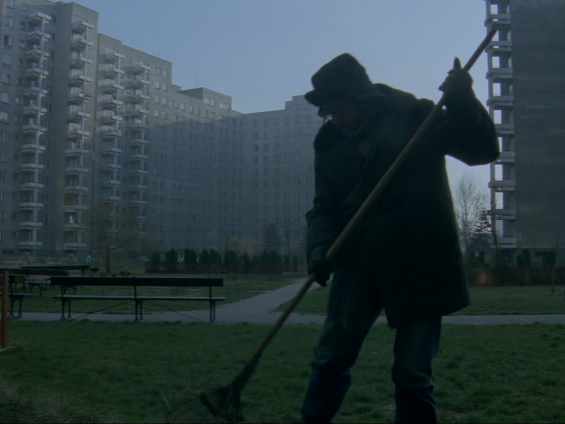 ‘Swear to it!’ – in this demand directed to a hard-faced doctor by pregnant Dorota, torn apart between love to her dying husband, another love to her lover living across the ocean and the desire to become a mother, which was impossible until then, the second commandment of the Decalogue echoes. At first, the doctor refuses to tell her his uncertain prognosis but he realizes that the unborn child’s life is at stake. In his memories, he recalls the drama experienced by him during the war, when he lost all his family. All that has left is a photo of his family and crippled faith in God who, as he believes, is not Almighty, but merely a private divinity. Yet a hardly noticeable by anyone orderly in the hospital, played by Artur Barciś, recalls the Reality that is not the subject of human predictions and limitations. The final part of the second film of The Decalogue consists of two moving sequences: the first is a masterful utopia travelling taking the viewers from the solitude of the characters closed in the micro-worlds of their experiences and feelings to a hospital room, where in a glass of compote a bee is fighting for life, symbolically promising victory over death. The final scene has a clearly religious character: during a night conversation with the doctor Andrzej, who looks similar to dead Christ shown in a Renaissance painting by Andrea Mantegna, confesses that he ‘came back from beyond’. The ambiguity of the end – perhaps the talk with Andrzej is only a dream? – finds its explanation in the fifth and eighth parts of the cycle; nevertheless, it does not dispel some doubts.