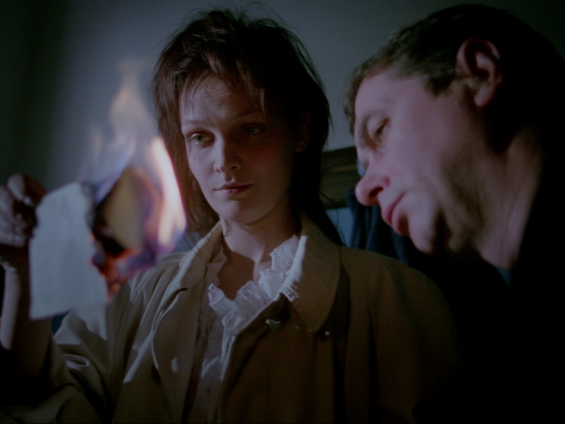 The Decalogue films are basically intimate dramas: two main characters and one character played by Artur Barciś, absent and reappearing in different roles are enough to make the story appealing to the emotions and imagination of viewers. The fourth part of the cycle begins on Easter Monday. Michał, according to the tradition (as only such gestures are left from the Easter celebrations) plays water tricks on his adult daughter. A bit later, he goes abroad on a business trip, leaving, probably on purpose, an envelope with a disturbing message: ‘Open after my death.’ There is another envelope inside addressed by Anka’s mother when she was close to death, apparently writing about an important secret. When the woman is about to open the letter, the look of an oarsman (Artur Barciś) whom she meets, apparently not without reason, stops her from crossing the uncrossable barrier. Anka’s orderly life is shattered by suppositions and uncertainty: if Michał is not her father, is love other than daughter’s love towards his father possible? The mystery of melodrama remains unsolved; the late mother’s letter, read (or unread) – or maybe only its copywritten by her daughter? – is burnt. The opening sequence showing both characters standing by the windows which, by the way, are important motifs in the whole cycle – before or after? in the same flat or not? – constitutes a similar mystery. Is it the reason why the doctor, the neighbour known from The Decalogue, Two, bearing inside a drama of love broken prematurely appears on the screen?