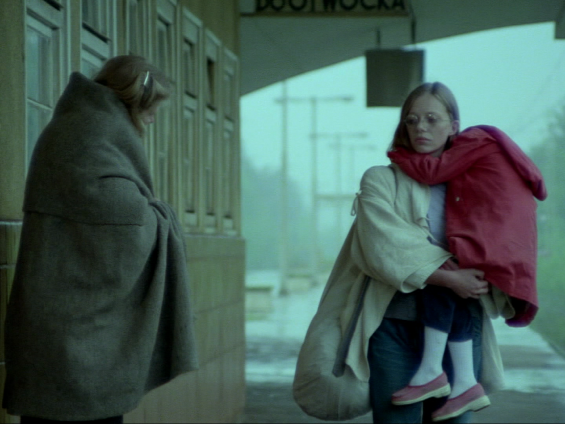 ‘Is it possible to steal a man?’ – it turns out it is. Majka, a student, runs away from home, abducting her 6-year-old daughter Ania, the fruit of her romance with her former teacher. To avoid the scandal, the girl was adopted by her grandmother who deprived Majka of her right to be a parent. Too impossible to be true? Not really. In Krzysztof Piesiewicz’s legal practice, he saw an even more dramatic case as it was connected with incest. A child asking whether she still has a mother becomes a victim of a long-term misunderstanding, inability to love, growing grievance and hate, like other children in Kieślowski’s cycle. Somewhere in the background, there are fathers – Majka’s and Ania’s, as guilty as the others, but silent and absent, running away from responsibility. In the seventh part of the cycle, even a man played by Artur Barciś is helpless. In the earlier episodes, he influences the main characters by looking at them in crucial moments. Here he impersonates a man leaning on crutches at the railway station in Józefów on Sunday morning, who gets out of the train to which Majka jumps into running away from her parents and leaving confused Ania. Does a man with crutches seen from a distance arrive too late to reduce aggression between two women that has been lasting for years? Kieślowski consistently lets his characters appear in different episodes: in The Decalogue, Nine, Ania plays alone at the playground and is watched from the window by the doctor, considering with his wife an adoption of a child. Inside, behind another window, one of many similar windows in the same block of flats, another drama unfolds.