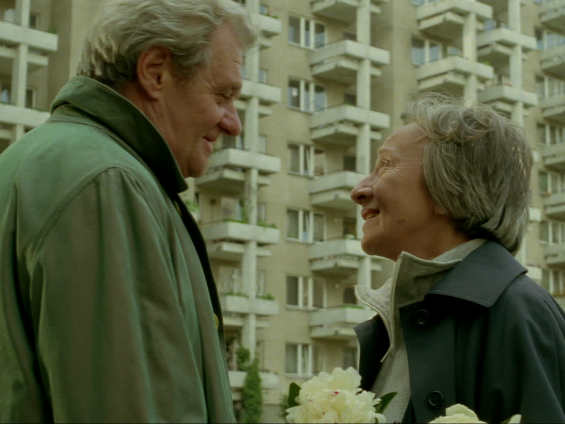 An unexpected meeting of two women: Elżbieta, a Jew of Polish origin living in the USA, studying the stories of the people that survived the Holocaust and an elderly ethics professor. They had met a long time ago, but only now Zofia recognizes her as the girl she refused to help during the Nazi occupation to save the resistance movement, put to the risk of exposure. The reason for her refusal remembered by Elżbieta was that she could not bring herself to lie to Him she believes in. Zofia has been living with a sense of guilt for the death of an innocent child, and Elżbieta – with the sense of rejection for decades. The film, probably inspired by Hanna Krall (‘I sometimes told Kieślowski about the girl I know very well – the one from The Decalogue, Eight’) is one of the first stories referring to the Holocaust, as well as to the Polish and Jews relations in the Polish cinematography. The director indicates the guilt and an unsolvable dilemma at the same time, eventually standing by the child’s side. The story from The Decalogue, Two, told by Zofia in the auditorium and its conclusion (‘the child’s life is the most important factor’) recalls the memories of Elżbieta (and is followed by a look of an invisible student with an already familiar face). Kieślowski, however, does not lock himself in the past but shows the solution. It consists of revealing hurting lies, finding the truth about the reasons for actions and forgiveness without which the future is going to be bitter. In the eighth film, for the first time since The Decalogue, One poses the question regarding God: in the night conversation of the two women, His name known from the Old and the New Testaments is recalled.