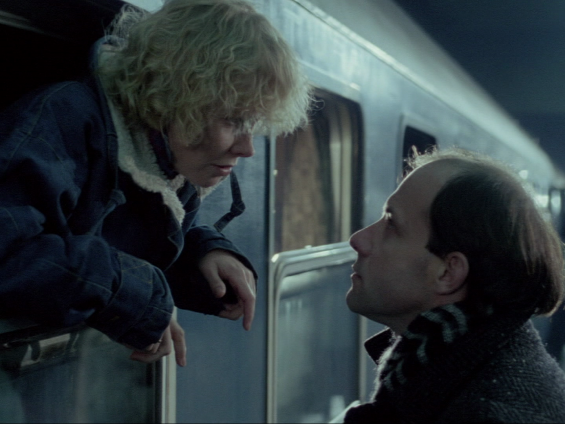 Two unsuccessful suicide attempts and Artur Barciś looking at them openly and close the episode, in which the main character, a cardiologist, cannot accept the fact that his friend, a sexologist, diagnosed him with permanent, incurable impotence. Roman’s wife convinces him that love does not mean only sex, but he suggests that she should feel released from her marriage fidelity oath. The crisis begins when Roman discovers that Hanka has had an affair with Mariusz, a much younger lover, for a long time. The reference to the commandments of the Decalogue, so unambiguous in Kieślowski’s films, is shown here in a surprising way: Hanka is an object of desire of her husband and Mariusz. The test the couple’s love is put to leads finally to its purification. The last but one episode reveals also the working method of Kieślowski and Piesiewicz who allow the ideas to mature: individual films, being closed narrative units are linked and refer to each other. Roman features in the sixth part of Kieślowski’s cycle: Tomek delivering milk in the morning meets him at the gate of the block of flats – they both experienced difficult love. For a moment, we can see Ania from the seventh part. A musical theme introduced by a young singer waiting for cardiac surgery reminding the character from The Double Life of Veronique (1991) is very interesting. It was her who inspires Roman to listen to and enjoy the music of Van den Budenmayer, whose composition (Nymphea) opens subsequent parts of The Decalogue. A Dutch composer, a fictitious character (the music was composed by Zbigniew Preisner), returns in The Double Life of Veronique and Three Colours.